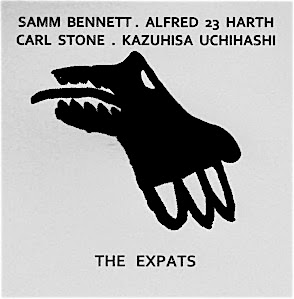 THE EXPATS is a special and unique album. Not only does it bring together four incredible talents in the free-music world, not only were they totally ON the night of this performance, but each brings to the performance the unseen yet felt 98% of the iceberg that kicks the performance into the transcendent sphere: ALFRED 23 HARTH, a man who has blazed his own trail since the late 1960′s, who has absorbed many musical traditions worldwide while totally re-inventing himself with each release (so many of his contemporaries have mastered a certain routine and simply repeat the same shtick with different players and in different contexts), for me the most interesting and most essential player in the international free-improv, post-free-jazz world; CARL STONE, pioneer in electronic composition and sampling, and one of the few out there who is a great composer AND a great improviser, and one whose “improvisations” use as their raw material the spontaneous creations of his fellow players; SAMM BENNETT, not just a heavy-hitter in the free-improv field, but an instrument maker and someone who has totally redefined the concept of the “song”; and KAZUHISA UCHIHASHI, totally original guitarist and daxophonist, a man with a great sensitivity in his playing who always pulls in the listeners. 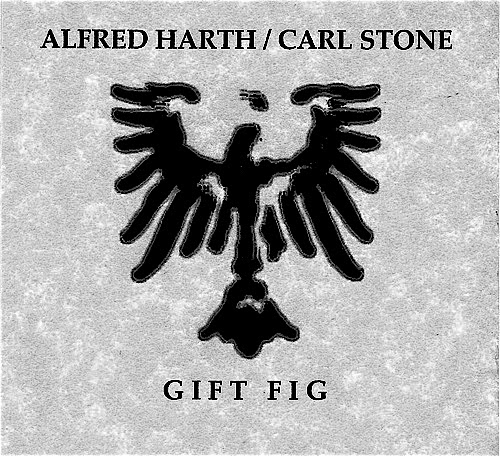 The German multi-instrumentalist free-improv, free-jazz master ALFRED 23 HARTH meets American electronic music pioneer CARL STONE live in Japan and Germany on this new album from Kendra Steiner Editions, “GIFT FIG” (KSE #207). Any album from either gentleman is always 1) an event and 2) totally different from the last album and from anything anyone else is doing. That’s what happening here in a series of almost telepathic live duos. It’s fitting that the title, GIFT FIG, is a palindrome because both Harth and Stone merge into one another and it’s hard to tell where one’s work begins and the other ends. Harth and Stone both echo the other,  tease the other, finish the other’s lines, proceed along parallel paths like two teenagers drag racing on the outskirts of town and eventually heading toward each other in a game of chicken, but escaping danger in the final moment,  causing our hearts to race. Harth was one of the first of musicians emerging from the late 60′s free-jazz/free-improv scene to embrace electronics, and Stone has been at the forefront of using electronics in a live setting for decades,  improvising with the ease and flow of a Sam Rivers and the freshness and inside-out investigations of a Derek Bailey…in addition to being an important American electronic composer. Harth continues his work with extended techniques on the reed instruments, explored thoroughly in his first KSE release, Micro-Saxo-Phone. Edition III (KSE #175), and with Stone’s seemingly infinite inventory of sounds and his mirroring of Harth’s lines in chopped-and-channeled form, you may feel you are listening to a musical version of the shootout in the house of mirrors at the climax of Orson Welles’ film The Lady From Shanghai. For me, this is as significant and timeless an album as The Music Improvisation Company or Conference of the Birds. 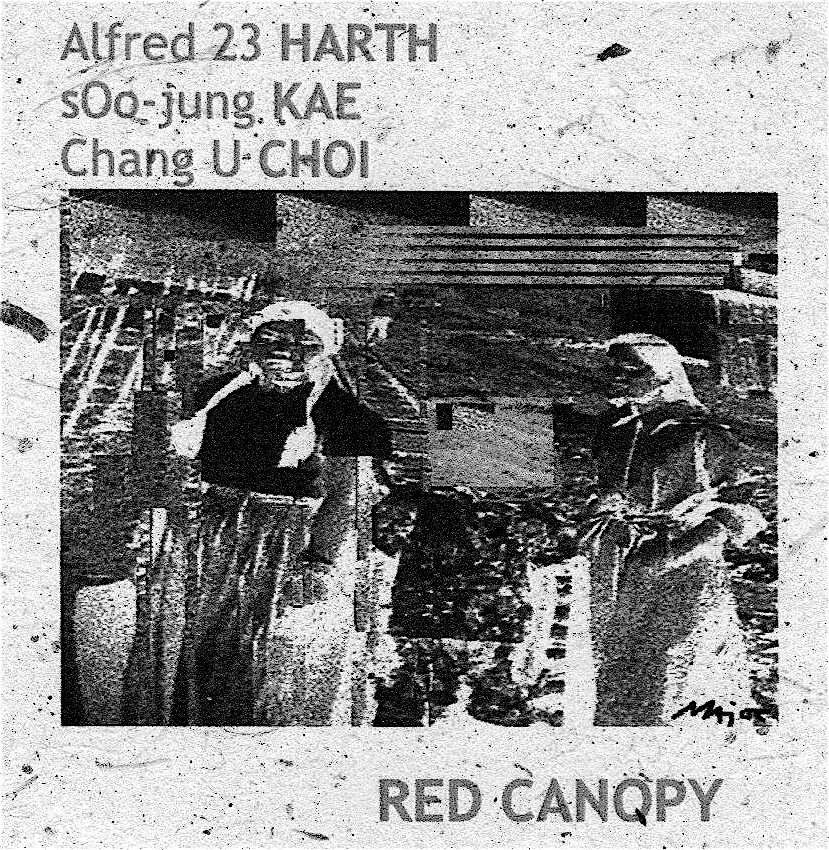 Including sound sources from:
Soo Jung Kae, Chang U Choi


The late Frank Zappa was among the first composers that I know to apply the process of “xenochrony” to music: that is to say, juxtaposing recordings from antithetic settings and diverse eras in a single, studio-generated opus. Red Canopy is founded on a kindred philosophy: the sounds were pre-recorded by each performer in 2005, and four years later Alfred Harth pasted them at Laubhuette in Seoul to produce just over 17 minutes of glorious work, definitely belonging to the schismatic German’s finest.

The tracks are evidently constructed on fleeting intuitions, but every instant counts. It all begins with a duet involving Choi’s double bass and Kae’s piano, the musicians left alone for the necessary time to thrust the listener right into a mood incorporating both thoughtfulness and sense of anticipation. When Harth enters the scene, the initial quietude is cracked by the impulse of telling many things promptly and eloquently. Yet it is in the following sections that we really need to come to terms with the idea that the artists never played unitedly. A track like “Samsa” features the same spirit of a well-adjusted room meeting, the magnificent flotsam and jetsam of a latent interaction consummately collected in what might resemble a chamber arrangement.The skilful exercising of loops and electronics expands and compounds the primary timbres, setting the instrumental attributes on a boundary line between baffling lyricality and overt experimentation. The 3-inch CD (which comes in a narrow 123-copy printing) ends with the umpteenth question mark, leaving us at a loss – once more – in front of a form of creativity that doesn’t demand continuance or, worse, a format in order to explicit its whole potential. 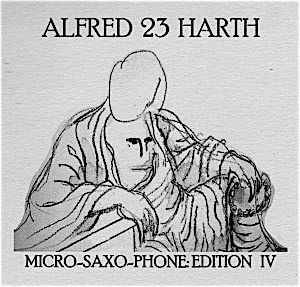 “msp4  again also stretches out in my musical history as a side effect. I remixed some of my very first electrified sax solos taken from my LP “Plan Eden” (1986, Creative Works Records/CWR), and also recalled some takes of msp1 (2007, which was never released) in a composed mix together with takes from my guitar solo CD “Vorgang” (2004, Laubhuette Productions). The solos on “Plan Eden” once had been a pure first documentation of my extended sax language, and I see them being very well refreshed in this msp context. The album “Vorgang” is all about an expedition into extended guitar language, and the amalgam of acoustic guitar sounds & air, saliva, needle springs & keys’ percussion takes of the sax leads here to another horizon. Another layer of history comes in by a short remix of a live recording of the “duo weltoffen” together with liquid sound/underwater music specialist Micky Remann from 1980 where I used bass sax besides other tools.And there is a two year old duo with Korea’s free music/trumpet maestro Choi Sun Bae and myself on the Korean traditional double reed wind instrument, taepyeongseo, which in it’s quarter tone aspects brings us back to contemporary music in a kind of fake folk manner. But the majority of this album is of left handed sax impros where simultaneously I used a Kaoss Padd (with my right hand), connected to the sax by contact mic. There are also dubbed miniatures which I regard as being more of compository enriched quality.” 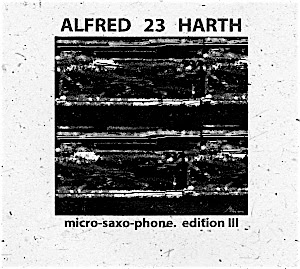 "micro_saxo_phone, edition II", CDR Laubhuette Production M10 from 2008 gave an overview about what I was trying to state within the traditional course of my former solo recording on Side A of the LP "Plan Eden" from 1986/7 where I had begun to use electronic devices & effects in combination with solo tenorsax, besides some usage of a harmonizer here & there in the early years. On "micro_saxo_phone, edition II" I used baritonsax, tenorsax, alto, sopran, bassclarinet, breathe & saliva noise multiphonics and even bowed the saxes’ bodies (con arco) during blowing and doing percussion with the instrument’s keys.

On "micro_saxo_phone.edition III" I extended the language by means of using the sounds of the key springs which create a kind of meditative Asian feel and also by texts.


I searched for finding a way to voice words during blowing (e.g. at the beginnung of "doublespeak" and tracks 14,15), or underlined words (and other stuff) that I had recorded on cassette in 1972 (when I was 23) or by dubbing an interview with Japanese art photographer Nobuyoshi Araki which I had recorded in 1998 in a kind of double voicing. The same track also contains a sample of Korean Gagok which is a kind of fake classical music - from some decades ago - made in Korea. "doublespeak" is the exception - as a composition – within the solos, as is "chukyo" using some of my eguitar recordings (as well as track 3). There are also some "classical" solos (without all effects or edits): track 9, 10 (underlined alto solo from 1972) and 13.


With that title "doublespeak" I also refer to George Orwell’s term "doublethink", which means the ability to believe contradictory ideas simultaneously. And there are more doublespeak titles here, as "surplussed", "twonky" (software designers’ jargon inspired by a 1953 sci-fi film starring Hans Conried and Gloria Blondell about a TV that is really an alien life form) etc. Other titles refer to themes and authors that I am also dealing with these days (e.g. Ray Kurzweil, Terence McKenna,) . "chukyo" is a dedication to Chukyo University in Nagoya, Japan, where I had been invited by the above mentioned Carl Stone to lecture and had met Fomal Haut, a great artist & pioneer of computer graphics.